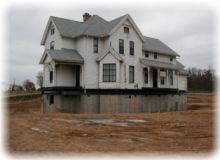 Many people driving down Three Mile Road between Walker and Bristol the past few years are wondering who is moving into that big, white farmhouse. It actually is going to be the new home of the Walker Historical Museum. It will be known as the Edison House, named after the family who originally developed the plat in the late 1830s. The family was also gracious enough to donate the house, which was built in 1890, to the City for use as a Historical Museum. What is just as exciting is the ongoing development of the grounds around the house into a new City Park, which will be known as Spring Hill Park (which is the original Edison Farm name). The grounds will feature walking trails, flower and vegetable gardens, a woodshed that will be recreated to its original design from the old Edison farm, as well as a public gathering place that will be able to hold a few hundred people.

Renovations are currently underway in the Edison House. Quality Edge, a local Walker company (and neighbor to the Edison House) has recently donated the costs of material and labor to redo the roof and reside the entire house. This job would have cost in excess of $100,000. 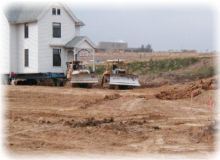 We have also recently received a substantial donation in the amount of $5,000 from the Tech Group, a new medical instrument manufacturer, located in the North Wilson Industrial Park plat. We are sincerely thankful to the Tech Group for its willingness to help preserve Walker's history with its generous donation. We are planning to use this money to restore the windows in the house.

Three local companies: Allied Electric, Contract Electric, and Houseman Construction have all graciously donated time and the people necessary to complete the initial phase of the project.

To have all of these businesses step forward in giving back to the community really provides support to the City's motto of "From solid roots... strong branches." Our heartfelt gratitude goes out to these icons of the Walker community.

The most recent work that has been done is the water and sewer hook-up. The piping and connections had to be run all the way from Three Mile Road to the Edison House and into the basement. These will eventually be connected for indoor plumbing. There has also been a great deal of work done to the exterior grounds by local Eagle Scouts and the City of Walker Department of Public Works employees. In addition, a local business, Tepper Nursery, donated some very nice, fast-growing trees to be placed at the Edison House. 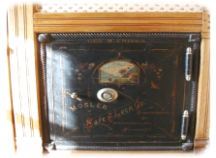 Many people have asked, how are we paying for the restoration? Most of the money will come in the form of grants from the state and federal government as they relate to historical preservation and the new city park. Additional monies will be gained from private donations and funding from charitable foundations. However, those activities all take some time, and the community is very anxious to see this project open up for use. So what we have done is begin the process of establishing the Edison House as a non-profit 501 C3 organization. This will allow us to apply for grant monies, as well as other sources of charitable income that we currently cannot utilize.

With many hills and a brand new commercial building right in the way, we began our move to our new home on November 1, 2002. The move itself took around four hours with two stops to get through some soft sand. After the move, the new foundation work was begun, along with the moving of a lot of dirt around the new site. Because of the original craftsmanship of the house, and the expert care from our friends at Rollaway Movers, the house held up extremely well through the move. There are only a few minor cracks in the walls that will be repaired once the renovating work has begun in full. When one considers the moving of a 104-ton object and the dangers that exist, heartfelt thanks need to go to the Edison family for their work in building something so solid, as well as to Rollaway Movers for the great job they did.

View a photo gallery of the move